Lost love at the heart of our exhibition on Ancient Egypt 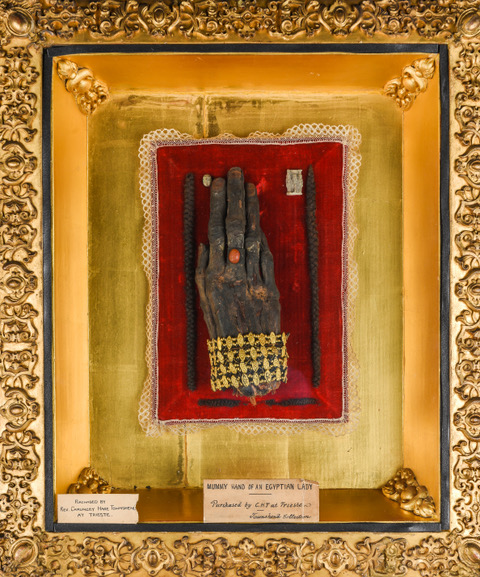 Our current free exhibition in our Hudson Gallery tells a story of lost love, a band of loyal friends and their search for the treasures of ancient Egypt many years before Tutenkhamun's tomb was found.

Our exhibition will continue up to October 26 for everyone who'd like to browse in greater depth a narrative that shines a light on British attitudes to travel and tourism then compared with today, when the experience is so much more widely available.

In 1864 a group of gentleman banking friends including the Barclay brothers took Lord Alexander Peckover on a Grand Tour of Egypt to ease his broken heart after the death of his young wife.

They boarded the riverboat Zuleika at Cairo to visit Luxor, Karnac, Thebes, Edfu and the Valley of the Kings.

Photographs taken of the early tourists beside ancient monuments like the Sphinx and other prints they bought of Egypt at the time together with excerpts from Alexander's lively journal and letters tell of “how completely at home we feel in Egypt, much more so than in France or Germany.”

Discomforts include 'noxious animals' in Alexander's berth on the boat, and there's his drawing of Egyptians hawking live scorpions each squirming on a pointed stick to the party.

All these and many more excerpts feature in the exhibition, along with curiosities and artefacts from Ancient Egypt bought on the tour, many of which sit next to labels in Alexander's recognisable copperplate handwriting and stamped 'Wisbech Museum', of which he was a patron.

He also painstakingly copied in watercolour plates from travel guides of the time showing the latest scholars' views of life in Ancient Egypt, which are all on display.

When he returned home to his three young daughters Elizabeth, Alexandrina and Anna Jane in Wisbech, Alexander gave a series of talks on his travels at the town's Working Men's Institute.