We delve into the hidden local stories and inspiration behind the upcoming exhibition Singapore with this blog, the first in a series on the exhibition, written by Singapore Curator and Chair of the Friends of Wisbech & Fenland Museum, Paul McGregor.

A LOOK BACK TO THE RECENT PAST

The Museum is to mount a small exhibition in February 2022 marking the 80th anniversary of a significant defeat for British forces in World War Two. This was the surrender at Singapore of British and Commonwealth troops to a numerically inferior Japanese opponent who proved to be better led, better organised and better equipped than the British and her allies. Many local men from the Fens were involved in the fighting and a significant number were never to return back to their homes. We are fortunate to have some very personal records available recording these times and events in the form of letters written by soldiers.

Letter writing is not now the main method of communication in the modern world. We predominantly use e mail, the phone, various apps such as WhatsApp etc. Changes in communication methods are only fairly recent however . For those of us ' of a certain age' the first thought for a communication was a letter , probably followed by a telephone call for those fortunate enough to have access to such a device. Letters were thus so important and they are often the only permanent record of a communication. For the Museum the preservation of such letters is of great importance.

Imagine my surprise and great interest around a year ago in a bundle of letters I was handed by Bernard Pentelow , formerly of Tydd St Giles but now in Wisbech. He loaned to me some 350 letters written by an uncle of his , also Bernard Pentelow , whilst the latter was on British Army service at the start of the Second World War in 1939. " See what you can make of these" was the comment passed by Bernard to me on handing the bundles over. There were also some photographs.

These letters are part of the record of the life of Sapper Bernard Pentelow of the 287th Field Company Royal Engineers. He joined the Army as a teenager having grown up on a farm at Tydd St Giles . He died in 1943 in a jungle camp in Burma aged 23. 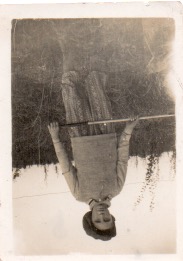 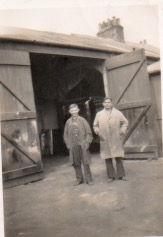 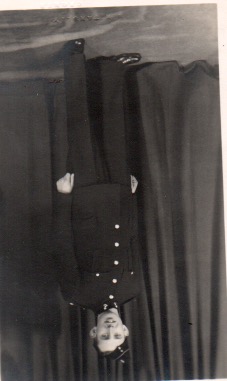 Photographs of Bernard Pentelow, left to right. On the farm as a child, at work before joining the Army and in formal Uniform in 1939. The Pentelow Family Archive.

Being given a bundle of letters such as these is a privilege and a challenge . " See what you can make of these" is not an invitation to do nothing. The letters were written from the start of Bernard's Army life in 1939 and continued until he was put on a boat at Southampton to fight " for King and Country " somewhere overseas in October 1941.

The letters written by Sapper Pentelow ( Sapper being the engineer equivalent of Private in the Army) are mostly to his parents Harold and Edie and his brother Norman. They detail his Army life and activities . We are privileged to get insights into not just very personal family matters but also the nuts and bolts of life in the armed forces in a very different world of the late 1930's. There is much humour in Bernard's letters, sadness too at missing the family and the important but mundane issues of life - getting a wash, having clean clothes, being bullied by aggressive Sergeants etc. Also combating a major issue in any army - being bored and how to get over that. Below is a letter dated Sunday 15th June 1941. 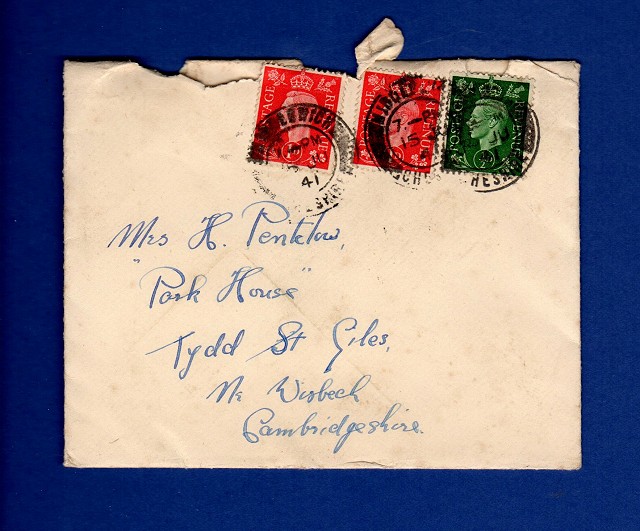 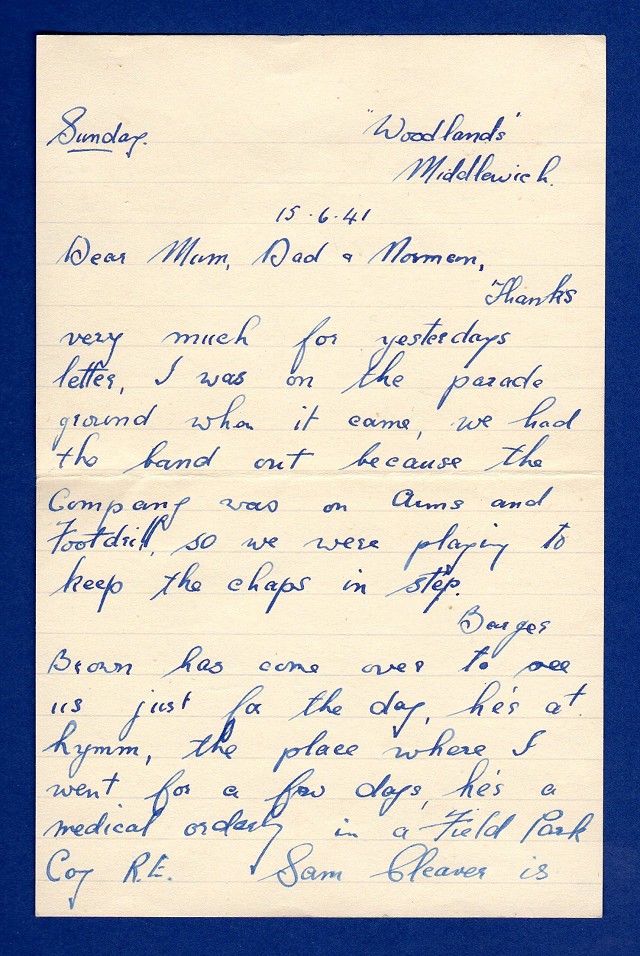 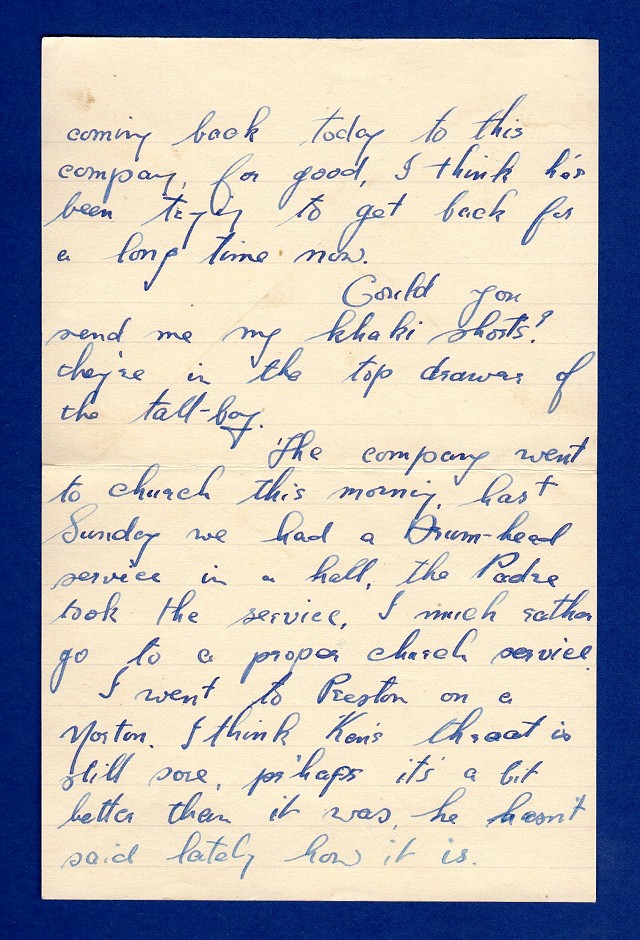 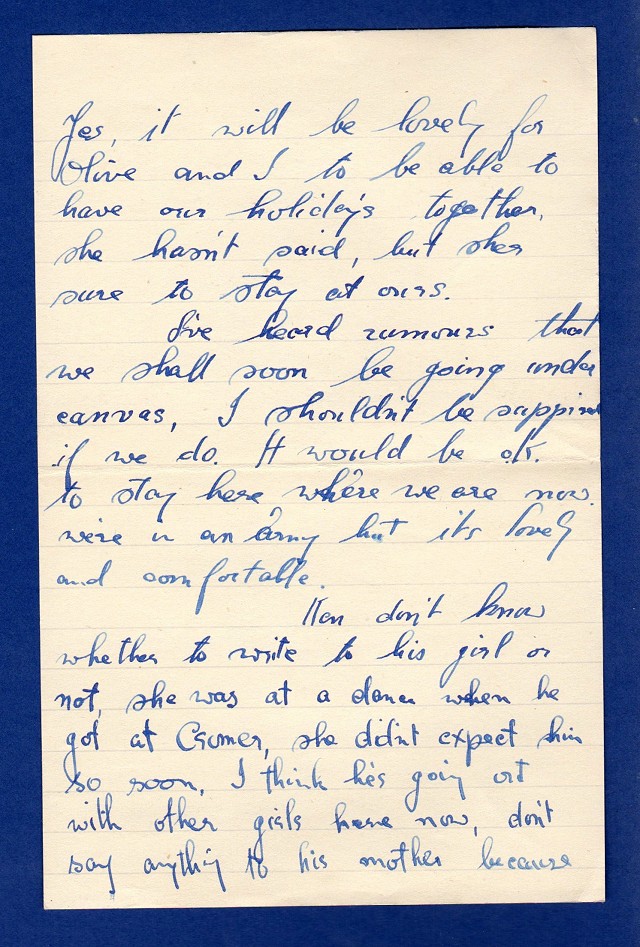 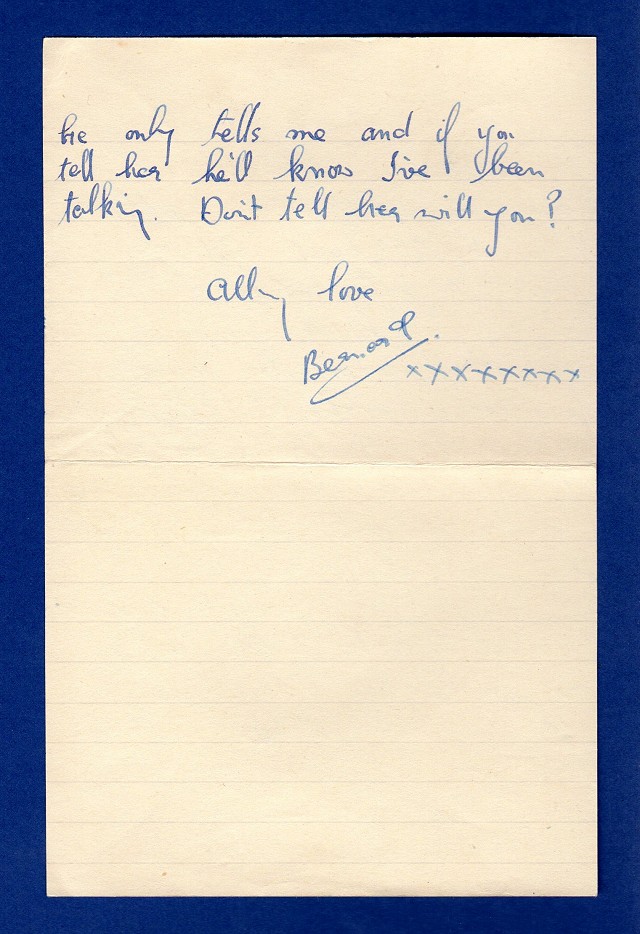 So, these letters started me off in researching further into Sapper 2090367 Bernard Raymond Pentelow. I managed to obtain from the National Archives at Kew the official War Diaries of his unit and pieced together a picture of the Army life 1939 - 1941 based on his letters and the official diaries.

The Singapore events of 1942 were a major defeat for Britain . No attempt was made to hide the catastrophe but , naturally in the middle of a war, inquests and finger pointing did not reveal to the public the mismanagement and sheer incompetence of some politicians and military men that led to the disaster. Sapper Pentelow was caught up in the centre of this. How he got on we can pursue in the next blog.