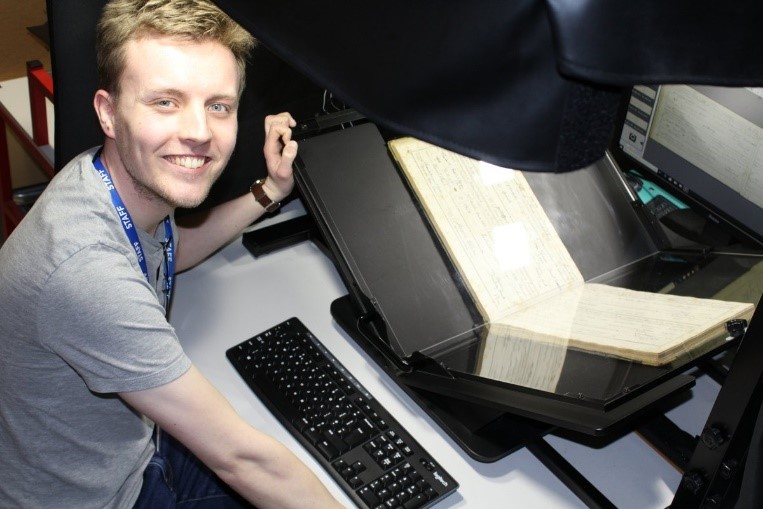 Having initially volunteered at Wisbech & Fenland Museum, I was delighted to learn new skills and begin a new role as a Digitisation Officer working for the Cambridge Family History Society. I really enjoyed reading the registers and I feel privileged to have been able to handle these amazing documents, some of which date back to the 16th Century.

Shortly after starting this job, I was given an opportunity of a lifetime. I was to be responsible for accompanying one of the most unique items from both English Literature and our collection: the original manuscript of Great Expectations by Charles Dickens, on its first trip away from the museum for some time.

The Manuscript was a gift from Charles Dickens to his good friend of over twenty years, the Reverend Chauncy Hare Townshend and it became part of Wisbech & Fenland Museum’s collection in 1868 as part of Townshend’s bequest.

The first time the Manuscript left the Museum was in 1951. The manuscript travelled to London where it spent a couple of weeks at the British Museum under the care of the British Council team before departing to Paris to be displayed as part of the British Council exhibition: ‘Le Livre Anglais’, which was a counterpart to the National Book League’s exhibition ‘1000 Years of French Books’ that had been held in London in 1948. ‘Le Livre Anglais’ opened in November 1951 at the Galerie Mezarine, in the Bibliothèque Nationale in Paris and was due to end on 31 December that year but was extended for a further two weeks in January 1952. Almost twenty years later it again travelled to London and was displayed at the Victora & Albert Museum from June to September 1970 as part of the ‘Charles Dickens Centenary’ exhibition.

This adventure would be a short one in comparison. The manuscript was going to go on display at the Royal Albert Hall in London for the Anglian Water sponsored Business in The Community Awards. This was an amazing thank you and celebratory event for the local community to enjoy in a wonderful venue.

Eventually the day arrived and at 8am on Monday 2nd July 2019, my colleagues and I were in the Museum conducting final checks of the packaging for Great Expectations whilst waiting for the arrival of the technicians from MOMART, a company that specialises in delivering artefacts and items of a delicate nature since 1972.

At 9am we left the Museum and headed onto the sunny motorway, my phone’s Spotify queued with hundreds of my favourite tunes to help ease my nerves. Despite my immersion in music I did take several opportunities to talk to the MOMART technicians, Alex and Ben, who were incredibly friendly. When we approached the manuscript’s evening accommodation, a large warehouse in Walthamstow, I looked inside the cavernous structure and could not help but think of the closing scenes of Raiders of the Lost Ark, so many boxes stacked from floor to ceiling albeit with better lighting. Once the manuscript had been securely stored away, I had the rest of the day to explore Walthamstow, a relatively new area to me. I grew up in London and it was nice to be back in the hustle and bustle of high street shoppers and red double decker buses. I thoroughly enjoyed my evening exploring the various shops, and meeting new people; however, the real work would begin the next day.

I threw on my suit at 5:30am and began my lengthy walk from the hotel to the warehouse. The journey to Kensington with MOMART felt like five minutes compared to the four to five flights of stairs we would then traverse carrying an incredibly heavy metal and glass display unit when we got to the Royal Albert Hall. The set-up of the manuscript and the event itself took place in a VIP room, decorated with photos of famous musicians and Elton John’s magnificent red piano. Large windows overlooking the main road to the Kensington Gardens and The Albert Memorial offered an amazing vista. This was to be my residence for the next eight hours or so, as the manuscript could not be left unattended, so I took the opportunity to mingle with the staff from Anglian Water before the event started. I stood in the heavily crowded room at 5pm acting as both an ambassador to the Museum and a bodyguard for the manuscript. People were eager to gaze at the manuscript and take pictures on their phones. I was thrilled to have met and spoken to such a great crowd of people, I got on particularly well with the photographers and journalists that evening as we discussed shared interests and I explained how unique and original Wisbech & Fenland Museum is. 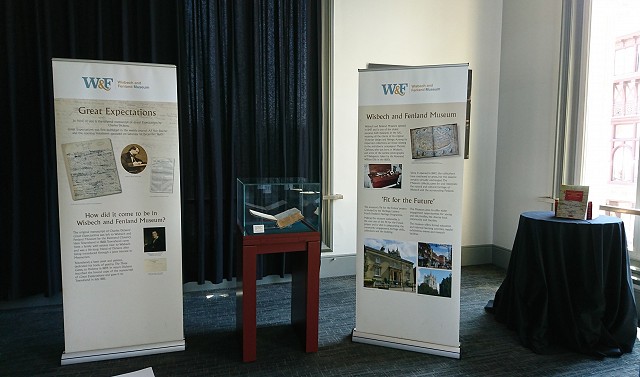 During an address to the audience a speaker mentioned the Museum and pointed me out to which I responded with an awkward smile and a small wave. Afterwards, I heard the amazing, deep toned voice of Sir Lenny Henry coming from the auditorium but alas I was unable to meet him. Lenny then chatted to young people from Wisbech regarding the success and development of the town.

I picked up a digitally scanned copy of Great Expectations - produced by the Cambridge University Library and sold in Wisbech & Fenland Museum’s gift shop - and began to decipher Dickens handwriting. Sufficed to say I did not get beyond the first page couple of pages! In fact, most of the guests to gaze upon the manuscript tried their hardest to read the first few sentences aloud. This event compelled me to revisit Dickens’s masterpiece - I had forgotten how emotional it was. 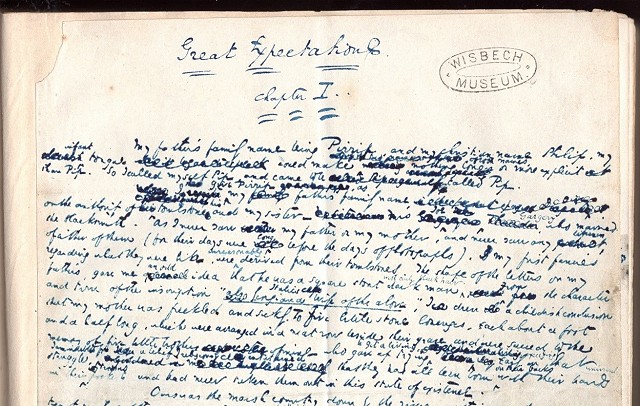 After a rather hasty but tasty dinner provided by the Albert Hall’s kitchen, I moved the case and manuscript to the exit of the auditorium. It was our hope to increase its visibility to exiting attendees. This proved to be a fruitful decision and in fact the manuscript gained the attention of not only guests but that of the staff and stewards. I relished the opportunity to speak to them. As the evening ended, hundreds of people began to exit the building, and I could hear the roars from Football fans who had been following the World Cup, all these factors made me somewhat uneasy as I had to safely pack away the manuscript within such a large and crowded environment. My legs tired from standing for just under fourteen hours straight and my mind swimming with excitement from so much social interaction, I was delighted to see the MOMART drivers who would take me back to the hotel in Walthamstow. I arrived back to my room at 2:30am and promptly fell asleep.

Despite how busy and stressful this three-day outreach event was I would not change a thing, this opportunity, given to me by the directors and staff, was one of the biggest highlights of my time at the Museum. It was truly a delight to participate in something I had always dreamed of doing; being a representative, sharing my historical knowledge and listening to the experiences and insights from a vast variety of people. Once I came out of my shell, I thrived in such a busy and crowded environment, my previous experience and skills from School and University prepared me for this event and were entirely transferable. I had never expected this early on into my career to be given such an enormous honour. This experience ultimately prepared me for future Outreach events in Cambridge and London representing Wisbech & Fenland Museum, but perhaps I will save those experiences in my next blog…

If you would like to find out more about the Cambridgeshire Family History Society and the Records digitized by Tristan, please go to their website at:   https://cfhs.org.uk/

A facsimile version of the Great Expectations Manuscript is available via the museum shop or mail order. Please call 01945 583817 to reserve a copy.

Written by Tristan Goodfellow, a BA graduate of Classical Civilisation from the University of Nottingham, and previously worked as a Digitisation Officer at Wisbech & Fenland Museum. Now resides in North London working as a Global Digital Librarian.