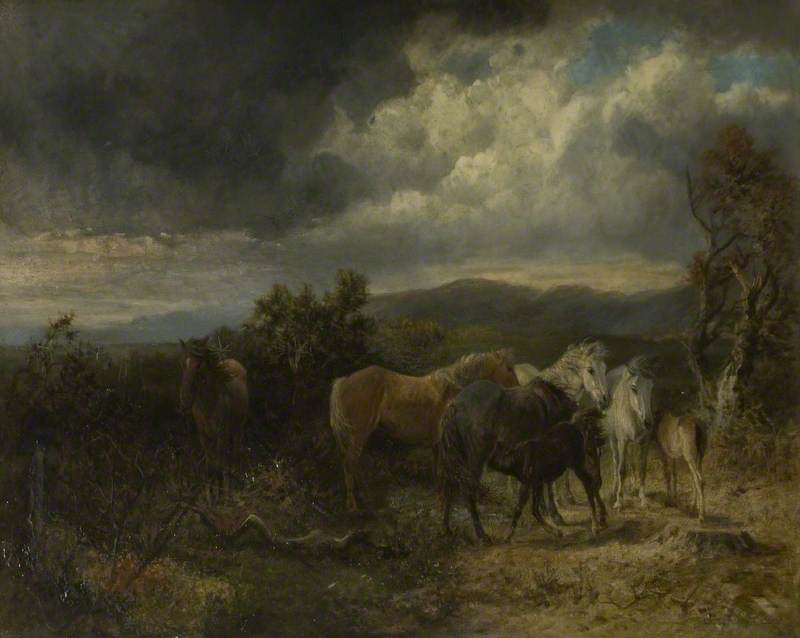 'New Conversations' is a current project at Wisbech and Fenland Museum which aims to encourage engagement with its collections on a wider scale across digital platforms to inspire audiences to participate and provide insight into the museum collection.

As part of this initiative, we are shining a spotlight on a remarkable painting within the collection 'Wind and Rain/ New Forest Ponies' by Lucy Elizabeth Kemp-Welch (1869-1958) and we are delighted to present Isabella Beeley's response to the painting completed during her post graduate work placement. 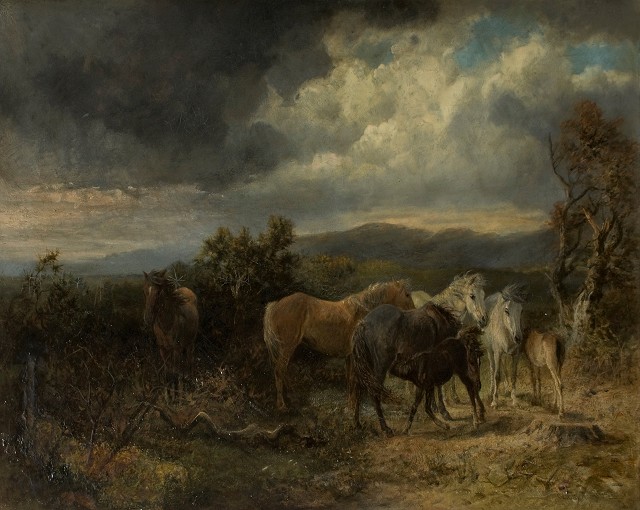 High on the wall within the Townshend Room, hidden amongst large cabinets filled with objects, the painting is not immediately noticeable by visitors. Kemp-Welch is a notable painter of predominately equine subjects, especially of wild and working horses, and is considered amongst the great British painters of this genre. A private and modest person- even her diaries are not personal but do reference her paintings and horses. That Kemp-Welch understood and loved horses, both as artistic subjects and as living, breathing animals, is noted by Kemp-Welch herself, ‘painting horses to me is the breath of life’. Her paintings are emotive and empathetic to horses, treating them as individuals and humanising them, which is evident in the Wisbech & Fenland Museum’s painting. When Kemp-Welch was growing up in Victorian England, there was a reliance on horsepower- public and private transport, in the army, commerce, industry, agriculture, mining and forestry. Horses were everywhere, and her interest for them as an artistic subject stems from a childhood upbringing surrounded by horses, domestic ones that she rode and cared for, and wild ones that she witnessed in the New Forest, which she drew and studied. She was an expert horsewoman with an in-depth knowledge of their anatomy and an innate feeling for them. While this blog is designed to highlight ‘Wind and Rain/ New Forest Ponies’, it is also important to contextualise it within her other paintings and illustrations. Kemp-Welch returns to the same themes of freedom and restraint, wild and domesticated, liberty and servitude- the two opposing sides of a horses life that will be discussed in this blog.

The first painting that she exhibited at the Royal Academy was 'Gypsy Horse Drovers’ (1895), which exhibits an early example of Kemp-Welch’s theme of the wild potential of horses not yet tamed. Humans do feature within her work, such as ‘Gypsy Horse Drovers’ but are never emphasised, with the horse always the prominent component to the narrative. Her canvases can be giant, which creates a greater visual impact while highlighting her emotional and personal investment in the subject. In 1896, to provide authenticity to her work, she took part in the drift or roundup of colts (for branding or sale) to study them for a painting. This endeavour resulted in 'Colt Hunting in the New Forest', an exuberant gallop of mane-tossing equine spirit and a Royal Academy Sensation in 1897. Her road to success was not always easy, with critical reviews, her age, gender, and even her diminutive size brought up constantly. However, her career was successful, resulting in her becoming the President of the Society of Animal Painters in 1914, one of the first two women members of the Royal Society of British Painters, and opening her own art school where students from around the world came to study animal painting.

For Kemp-Welch, the New Forest pony had always held her attention. The painting is also personal to Kemp-Welch in that she visited the New Forest with her father and sister. This painting is one of many with a New Forest theme, including 'Summer Drought in the New Forest' (1896), a pastoral image portraying mares and foals grazing. 'Wind and Rain/ New Forest Ponies' was acquired by the Wisbech and Fenland Museum as a gift by J. L. Kirk in 1937/1938, and it has been displayed in the Townshend Room since 1991. The painting is a landscape, a desolate, untamed wilderness with the main subjects in the forefront, seven New Forest Ponies, adults and foals. New Forest Ponies are a native rare breed to Britain. Though owned by the New Forest Commoners, today, 5000 semi-feral horses live in the New Forest, with some having owners and others never tamed. Reflecting the title, the sky is filled with dark, angry clouds, heavy with rain, oppressively atmospheric anticipating the incoming storm. The dark clouds threaten to engorge the white clouds, and a sliver of blue sky is attempting to break through. The horses are huddled close, giving the impression of protecting themselves from the elements. Freedom appears to be the overriding theme. There is no sign of human life, and the horses are undisturbed within this landscape. The impression of wind is seen in the bend of the trees and the implied movement of the horses manes and tails. Kemp-Welch has successfully captured the horses natural spirit- their conflicting nature of calm and wild, and like the storm, they can be temperamental yet peaceful. Though dark, the colour palette is also contrasting, with the horses separated into bays and whites (a recurring artistic choice within her artwork) with a chink of light source between the sun and the clouds. There is also a sense of hope as the herd's tight family unit is obvious, the adult horses protecting the foals, and they will weather the storm together. The sky is dominating with the clear distinction between black and white, and it is interesting how Kemp-Welch placed the darker horses beneath the storm clouds and the white horses beneath the lighter sky.

Horses as distinct subjects have featured in art for millennia since the ice age and pre-historic eras, including the Uffington White Horse carving. From the classical antiquity of ancient Rome and Greece, a popular depiction of the horse was in military and war scenes, through the Renaissance with Raphael and Titian and the Baroque with Rubens and Velasquez where horses, including with regal subjects. Thus differing genres and types abound, including George Stubb’s 18 century anatomically accurate depictions or Benjamin Marshall’s horse-racing work. Hunting, rural and working life scenes are very prolific in British art history, including the artworks of Lionel Edwards and Cecil Aldin. A contemporary of Kemp-Welch was Elizabeth Thompson, whose paintings include the Royal Scots Greys dramatic charge, 'Jutland Forever' (1881). 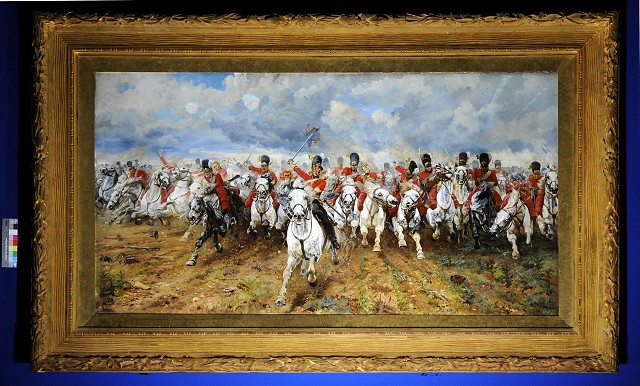 Another contemporary and friend was Sir Alfred Munnings, a forefront painter of the horse, including depictions of World War One, for example, the poignant and loyal ‘Peggy’ (1918). 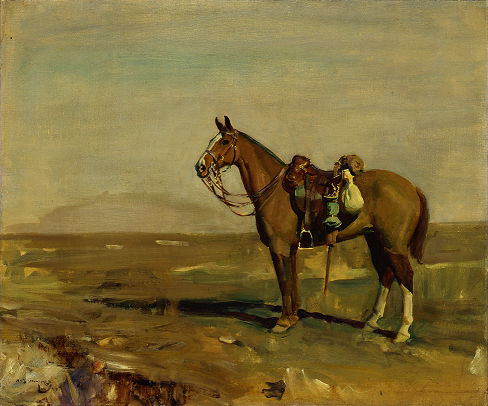 In all these genres, the spirit of the horse is undiminished, with freedom and restraint clearly themed. 'Young April' (1910) epitomises these ideas of liberty and control, whereby a young girl tempers a skittish horse. Freedom within Kemp-Welch’s equine paintings mirror the freedom Victorian era girls were allowed when riding. To be unchaperoned allowed independence for women in a society that did not offer much in the way of liberty. 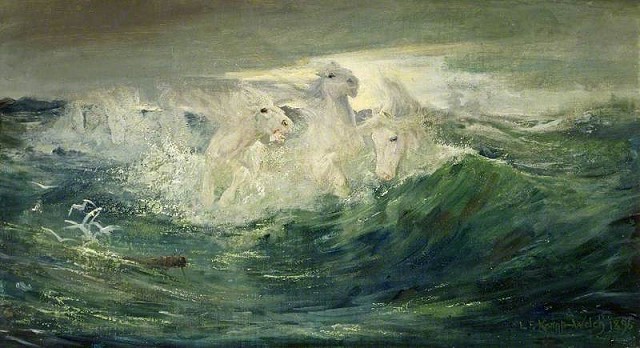 This theme of unrestraint is displayed by the wild horses that feature within many of Kemp-Welch’s paintings. ‘Foam Horses’ (1896) depicts wild and unfettered horses, cresting the sea waves with an abundance of terror, excitement, defiance and recklessness.

In comparison, Kemp-Welch could paint in a more restrained manner, as seen in her tender wild mare and foal paintings, for example, ‘Drinking Place in the Forest’ (1901).

Within the theme of restraint, Kemp-Welch acknowledges the hardworking nature of domesticated horses, as exemplified by ‘Harvesters’ (1899), an agricultural scene depicting the power and dignity of the working horse.

The epitome of restraint and duty is shown in Kemp-Welch’s military horse paintings, including ‘In Sight’ (1901) from the Boer War. Kemp-Welch also painted horses in military service during World War One, where they were utilised in many aspects, including hauling guns and supplies. The British Parliamentary Recruiting Committee engaged Kemp-Welch to paint an army recruitment poster in 1914, 'Forward! Forward to Victory Enlist Now'. 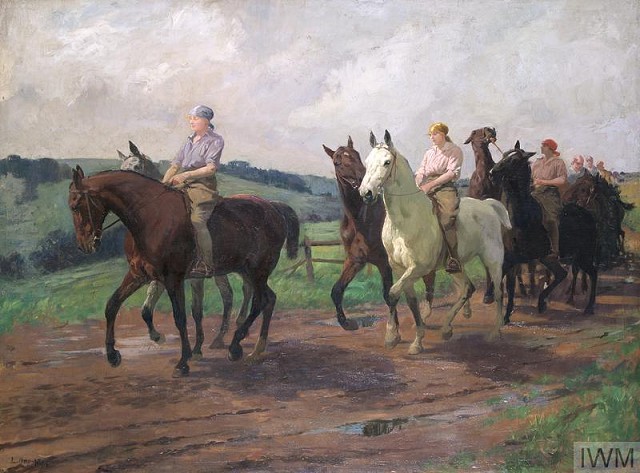 In 1918, the women's work section of the Imperial War Museum commissioned her to paint a scene at the largest Army Remount Depot, where women trained and prepared horses for military service. Unhappy with the 'Ladies Remount Depot Russley Park, Wiltshire' painting, Kemp-Welch gave the 'Straw Ride Russley Park, Remount Dep't Wiltshire' for free instead. To sketch horses at close quarters and in motion, Kemp-Welch visited the Royal Artillery Camp on Salisbury Plain, where eight horse artillery batteries were continually ridden towards her. This resulted in paintings such as 'Forward the Guns’ (1917). In stark comparison to the horrors of war, Kemp-Welch also painted circus horses, including the lively and colourful ‘Stars at Leisure’ (1928-1930). These circus paintings usually focused upon the horse-tents and cream coloured horses.

A series of work by Kemp-Welch that transcends both themes of freedom and restraint is the major illustrative commission by J. M. Dent to illustrate Anna Sewell's 'Black Beauty' in 1915. This version of 'Black Beauty' remains the undisputed favourite and became the best selling illustrated children's book. 'Black Beauty’s' story is filled with spirit and independence, vitality, duty, hopes and disappointments. Kemp-Welch’s horse, Black Prince, was the inspiration for the illustrations and her rapport with him enabled her to create a defined personality for Black Beauty. Symbiotic of both prominent tropes, freedom and restraint, Kemp-Welch’s illustrative landscapes are wild yet tamed, with open skies and rolling hills. As told by Black Beauty, Kemp-Welch emotive illustrations mirror the horse’s journey through various phases of his life and reflect his memories of joy and liberty, through loss, decline and restraint and back to freedom.

‘Wind and Rain/ New Forest Ponies’ stands testament to the vigour of composition by Kemp-Welch. As seen through her horse paintings, her life's progression reflects the key themes of freedom and restraint: freedom she felt as a young girl riding unchaperoned and the restraint of conventions. Kemp-Welch’s paintings are an autobiographical projection of an indomitable horse painter as much as they are autobiographies of the horses she paints.

Isabella Beeley is currently writing her dissertation for her Cultural Heritage and Museums Studies MA course at the University of East Anglia and when completed wishes to work within the cultural heritage sector.