By Laura, a member of Young Curators

Young Curators are a group of twelve young people aged 15-24 taking part in a project funded by The National Lottery Heritage Fund to develop a Design Brief that will inform the redisplay of Ancient Egyptian material in the Museum's Main Gallery.

This blog has been written by Laura, a participant in the Young Curators project, as part of the Kids in Museums Digital Takeover Day 2021.

I love shabtis, if that wasn’t obvious from the title of this blog post. They’re incredible pieces of history and invaluable to our understanding of belief in the afterlife in Ancient Egypt.

The history of shabtis is often overlooked as, with so many spread across museums all over the world, we all tend to assume they are very much one and the same. But they are not!

The word shabti first appeared in the Twelfth Dynasty, around 1985 to 1773 BCE in funerary texts which described them as representations of their owners. But shabtis, or rather their ancestors, existed long before that. Small human figurines have been found in Egyptian tombs as old as the Fourth Dynasty, around 2613 to 1494 BCE. The deceased were buried with servant statues made to look like bakers and butchers who would provide their owners with sustenance in the afterlife.

The earliest shabtis were made of wax, but these are rare to find and not many are on display due to their poor preservation. We are lucky to have a diverse collection of shabtis at Wisbech & Fenland Museum, varying in shape, size and colour. Although there are no wax shabtis in the collection, there are plenty of excellently preserved shabtis that will soon be on display again!

The reason why we see shabtis so often in museums is because, during the New Kingdom, around 1550 to 1069 BCE, shabtis became a far more popular product and were mass produced. Shabtis now filled even more roles, like field workers and farmers. Eventually, some tombs had so many shabtis that the role of the shabti overseer was introduced – this was another shabti, usually slightly larger with more text written on them to identity them as the supervisor of the worker shabtis in the afterlife. Some tombs had one shabti for every day of the year! With that many workers, someone had to organise them all and it wasn’t going to be their owner who was planning on relaxing in the afterlife. According to some, the ideal number of shabtis was 401 - 365 worker shabtis, one for every day of the year, and 36 overseer-shabtis, one for every Egyptian 10-day week.

It wasn’t until the Ptolemaic Period, around 332 to 30 BCE, that shabtis went out of fashion and stopped being produced all together.

With such an interesting history as this, how could you not love shabtis?

My particular interest lies in the popularity of shabtis in the modern day. You would struggle to find an Egyptian collection in the UK without a shabti. Due to their small size, they were the perfect trinket to take from excavations during the early 1900’s. Excavators would often gift shabtis to their funders to keep them happy – and keep them paying their expenses! This does bring about an issue for us in the 21st century as, with their being so many shabtis spread across the world, it makes their value seem a lot less than I believe it should be. Anyone who has been to see an Ancient Egyptian collection will have seen a shabti. They become this very common and unexciting thing that people often overlook.

In reality, shabtis have been a vital contributor to our understanding of Ancient Egypt. Of particular interest to me is the shabti spell, also found in Chapter 6 of the Book of the Dead – a collection of spells from Ancient Egypt. Most shabtis only have the name and title of their owner, but some have the shabti spell which essentially details the role of the shabti – to serve in place of their owner in the afterlife. The roles these shabtis play in the afterlife reflect those that living people would have had, giving us an insight into the everyday workings of Ancient Egypt that we tend not to see on display.

My personal favourite shabti from the Wisbech & Fenland Museum is a beautiful blue glazed faience shabti with black hand-written hieroglyphs. 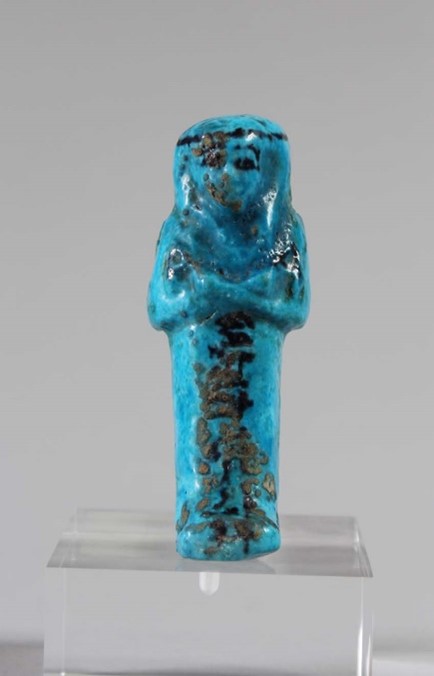 While the colour makes this shabti stand out amongst the usually sandy coloured shabtis, the quality of the writing and the glaze is rather poor. Small holes have        appeared in the glaze where it was poorly applied, and bubbles have formed and burst during the firing process. This is just one example of the varying quality of shabtis that came about at a time of mass production. There are some shabtis in the collection that are barely discernible as people. Many have withered and eroded overtime leaving more of a general stump than a human figure to be displayed at the museum.

One of my tasks as part of the Young Curators project was to evaluate whether the museum should have a large collection of shabtis bundled all together like a little shabti army to emphasis the sheer number of these figurines some tombs had, or alternatively, to have a smaller display of a select few shabtis.

After looking at the shabtis from the Wisbech & Fenland collection, my opinion is still uncertain. Both types of display would work well with the collection available: my love of shabtis is urging me to promote having a shabti army and display as many as possible to the public, but practically this may not be the best approach. Many of the shabtis are not in good condition and are so small it would be difficult to see them through a glass cabinet.

With a smaller display we could explore the variety of shabtis in the collection, looking at the different ways of writing hieroglyphs, or the materials used, or even how they differ in manufacture. 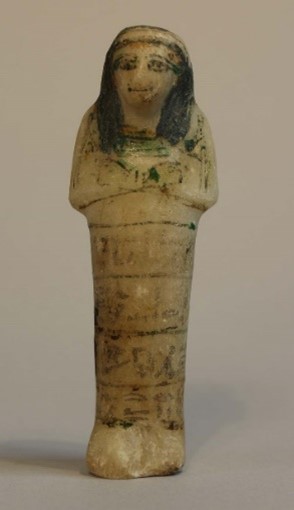 One shabti I am particularly fond of has a painted-on face, whereas usually the face is carved into the material.

Some of the shabtis also have incredibly clear hieroglyphs and it would be a great opportunity to explore mortuary texts and spells, if they could be translated. I have a personal interest in hieroglyphs so may be slightly biased in favour of this display.

The main message I wish to share, is next time you go to a museum and see all the wonderful golden masks and sarcophagi from Ancient Egypt, don’t forget about the little guy – quite literally, shabtis are usually very small. There may be thousands of them all around the world, but they have lasted just as long as the wonderful golden objects and deserve just as much credit to contributing to Egyptian history.